“Greater than the roar of many waters—

The mighty breakers of the sea—

The LORD on high is majestic.

LORD, your testimonies are completely reliable;

Holiness is the beauty of Your house

For all the days to come.”

I recently re-watched The Impossible and was given a glimpse into the incredible power and destruction of a tsunami. Based on a true story, the family in the film is caught off-guard by the colossal surge of waves from a tsunami that hit Taiwan in 2004.

In only seconds, the waves ravaged and ripped apart the young family. The unstoppable currents flung them about debris causing injury and near-drowning. The devastation of the raging waters dominates much of the film. But by nothing short of a small miracle, each family member survives the excruciating ordeal and is reunited with one another in the end. [1]

While considering the devastating effects of raging waters, I recalled another film. Again based on a true story, the crew in The Perfect Storm are caught unaware of their perilous positioning on the sea as two massive storm systems merge into one. The odds of survival leave them with no choice but to brave the storm. The most striking scene is the one as their minuscule ship steams up an enormous tidal wave wall, which leaves the viewer well aware that this is undoubtedly their end. [2]

Without question, the ocean’s waters possess some of the most tremendous power known to earth. Whether hurricanes, tsunamis, or tumultuous winds and waves, the seas can easily obliterate all in their path. The destructive forces of the waters remind us of our frailty and inability to control them. However, there is One who is yet unmoved by them.

As we have journeyed through Psalm 93, we’ve been given glimpses of God and his grandeur and felt the panic of rising floodwaters described by the psalmist.

But today, as we near the conclusion of this Psalm study, we read in verse 4, “The Lord on high is majestic.” Here we see that all the devastating effects of the seas fail to disturb the Lord on high. When our lives spiral out of control, it’s easy to become panicked as we try to keep our heads above the waters. But we must remember, the Lord is yet on high. What a marvelous image this Psalm paints for us!

The Lord is not only not moved by our troubles, but because He sits on high, only He can truly save and help us. He is unaffected by the waters. He remains steady and constant even when are not. Isaiah 41:10 says, “Do not fear, for I am with you; do not be afraid, for I am your God. I will strengthen you and give you help; I will uphold you with my victorious right hand.”

But the real “power” statement of Psalm 93 is not in His lofty positioning or His glorious majesty as He reigns on high. The absolute truth to hold on to is found in verse 5, “LORD, your testimonies are completely reliable. Holiness is the beauty of your house for all the days to come.”

The testimonies of the Lord are true and trustworthy. His testimonies are like a sheer, impassible rock cliff. With all their roar, the ocean waves only crash into it and dissipate. In other words, what He has done is reliable. And what He says in His Word is unmovable.

Think about it. What can you attest and accredit to God alone? What do you know to be true of Him? Have you seen His truth prevail?

I recall years of my life where the waters only seemed to rise and rage. After a while, I became tempted to question God–to doubt in His goodness. But by His Word, I found the truth. And this eventually became my lifeline. Though it resembled only a tiny thread of truth at the time, the waves did nothing to disturb it. His truth held me fast to the Lord through many dark days. And as I held tightly to His truth, I saw that I could rely upon it. And I learned how to rely upon Him.

Psalm 18:16-17 tells us, “He reached down from on high and took hold of me; he drew me out of the deep waters. He rescued me from my powerful enemy, from my foes, who were too strong for me.” You see, God knows what we are up against when the waters come. He knows we don’t stand a chance on our own. He knows people will fail us, what we’ve worked for can be lost, and how we are unable to sustain ourselves. We need Him. And the waters remind us of this.

I don’t wish calamity for anyone. But I can testify to finding the Lord ever-present as I’ve treaded waters in my own life. In one way, the waters can be devastating. They pull you away from loved ones, rip apart your dignity, dash your faith, and much more.

But the waters also hold tremendous potential to bring us closer to God. When you find the Lord there in their midst, you are indescribably moved and reassured by His presence. It is perhaps, the most precious thing you will ever encounter. You see first-hand that “His testimonies are completely reliable.” And they become the bedrock of your own testimony about Him.

So I pray for you. I pray that you will become enthralled with God. That His greatness will continually overwhelm you so that when the waters rise, you can always see Him unmoved on His high and majestically wonderful throne. That as He extends His loving arm to reach down and lift you from deep waters, you will bear witness to the salvation of your God and forever praise His holy name. 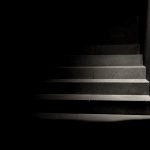 Have you ever found yourself clinging tightly to the last words of a loved one? Maybe it was your best friend who moved away in the sixth grade or your favorite boss’s farewell address upon retirement.  In the last few days of her life, my grandmother spoke words of kindness and love to me that I […]